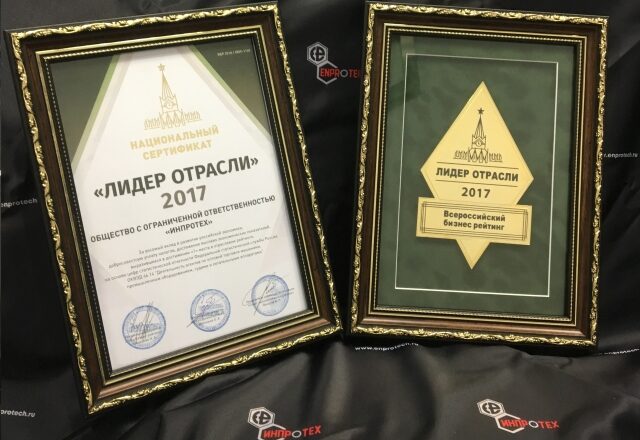 According to the program results of all-Russian business rating EnProTech has taken the first place in the category “Agents’ Activity in Wholesale Trade of Machinery and Industrial Equipment”. So the company was awarded the honorary title-status “The Leader of Industry 2017” for a significant contribution to the development of the Russian economy and reaching high economic performance. This achievement is a deserved award for the talented and highly professional management of the work process, hard work and diligent attitude to the business.

Despite its young years EnProtech Ltd has managed to become “The Leader of Industry 2017” in the Supplier market. It gives the company confidence and the desire not only to hold the position but also to move forward to conquer new aims and goals. It is pleasant to realize that the company together with the reliable head and strong working team have taken the leading position in the rating among competitors. The year of fruitful work has brought EnProTech its results – much appreciation was expressed for the successes and achievements.

It is important to emphasize the significance of the award “The Leader of Industry 2017” received by EnProTech Ltd because first of all it documents the reliability and integrity of the company, and also stimulates the team to maintain and improve its image on the Russian arena of mining profile Suppliers. Moreover “The Leader of Industry 2017” is an excellent addition to the historical case of the achievements of a rapidly growing and developing company, as well as a significant advantage in attracting investments, participating in tenders, competitions, conferences, summits and partner programs.

In addition to personal company success the trust of regular and new Customers should be also noted. Due to this EnProTech Ltd can confidently face the future as well as develop in accordance with the growing needs of production. Besides having originated in St. Petersburg, despite the difficult economic and political situation in the country and industry as a whole, the company EnProTech cares not only about the profit of its own business but also makes a great contribution to the future of its region and state. Thanks to its work the state and local budgets are being filled, additional jobs appear, contributions to social and pension funds are being made, social and economic programs are being implemented, new technologies and innovations are being developed and introduced. All this makes it possible to form a new modern type of economy and business elite of the Russian Federation focused on the use of the latest achievements in the management of enterprises and the introduction of the latest discoveries of science and technology in production.